“The only thing constant in life  is change.”    Francois de la Rochefoucauld

The many changes that have taken place throughout the  history of Mercy Medical Center become readily apparent through the “Hallmarks of Mercy”.  From the saloon that housed the first hospital to this state-of-the-art structure completed in the year 2000.  From the advent of Medicare in the 60s to managed health care.  From basis medical treatments at the turn of the century to the focus on prevention  in the new century.

The ability to keep moving forward by embracing change – or  in some cases, in spite of change—is what determines great leadership.  The leadership of Mercy Medical Center is composed of a team:  physicians, hospital sponsors and administrators, volunteer board members, community leaders and supporters, Mercy Foundation donors and volunteers in all capacities.

These people have helped shape Mercy Medical Center by knowing when to expand and when to economize; when to introduce new programs and when to move out of old ones.  They’ve also recognized that certain values are important enough to pass on from generation to generation.

Volunteer efforts, for instance, have always been critical to Mercy’s success.  After all, the founding sisters, who worked tirelessly without pay, were the original volunteers.  In the future, we will not only continue to enlist the help of traditional volunteers, we’ll also require the support of more people with high-tech skills.

This will be but one of the challenges Mercy must overcome to provide quality health care with scarce resources in a highly competitive environment.  But if past is any indication of what lies ahead, there will always be people ready to step forward and respond to the needs of the day. 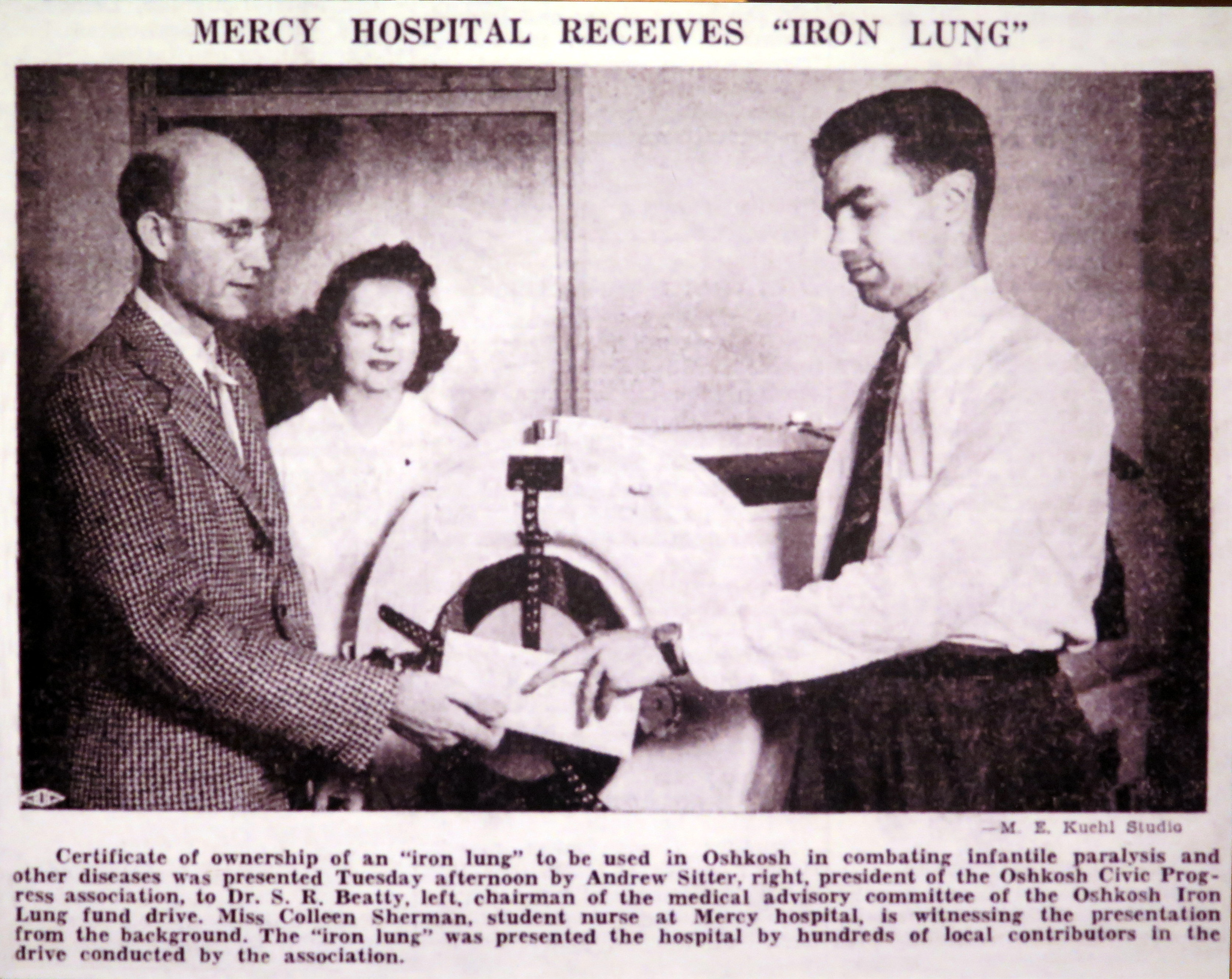 An “iron lung”, purchased by hundreds of local contributors to combat infantile paralysis and other diseases, was presented to Mercy Hospital.  “..at a  time when infantile paralysis cases were prevalent throughout the middlewest and epidemics in our immediate state area were making us conscious of the disease, our association voted to start the Oshkosh fund drive”, stated Andrew Sitter, president of the Oshkosh Civic Progress Association, shown at right in photo, presenting the  certificate of ownership to Dr. S. R. Beatty, chairman of the medical advisory committee of the Oshkosh Iron Lung Fund Drive (left in photo), with Mercy Hospital student nurse Colleen Sherman looking on. 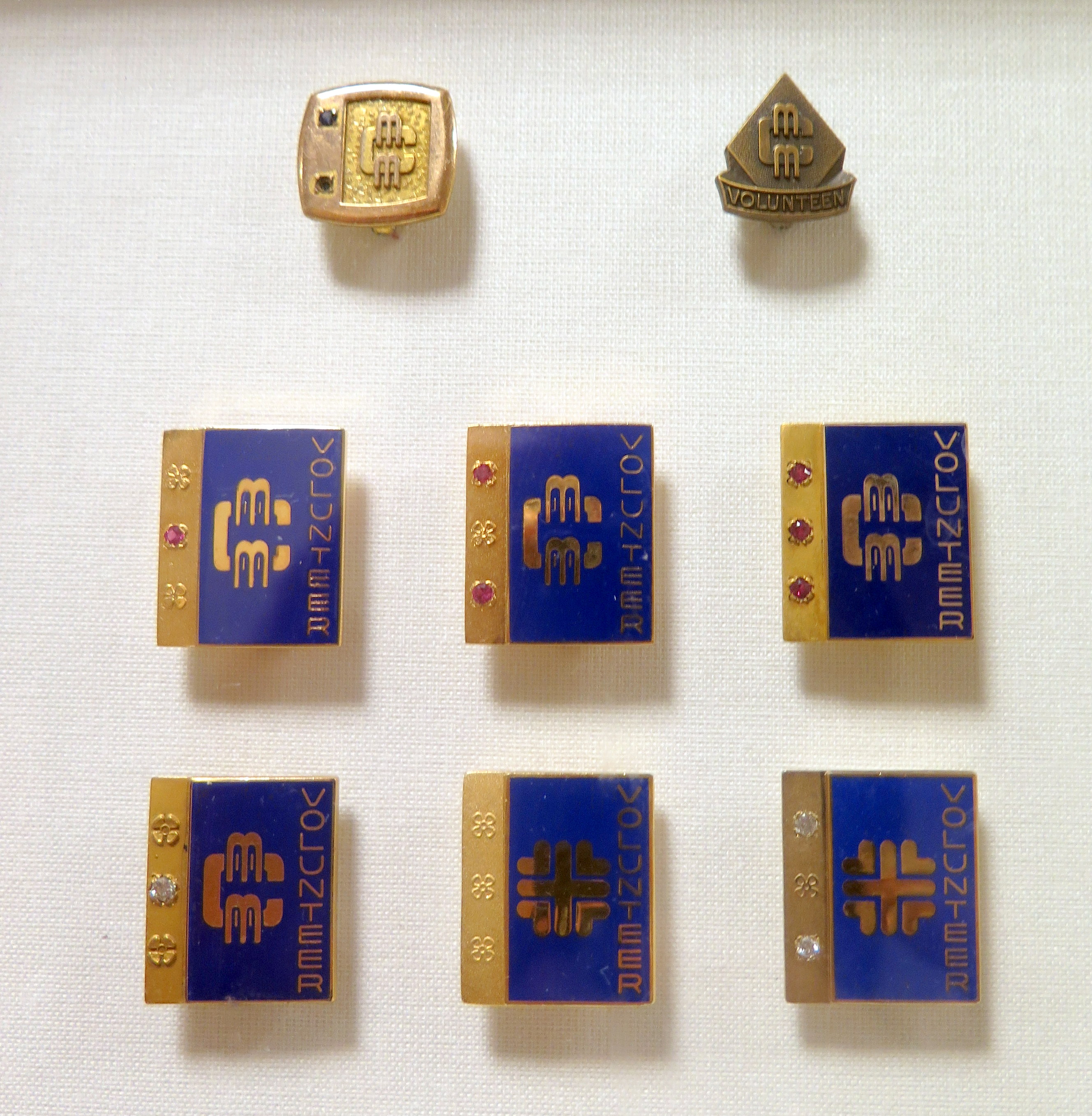 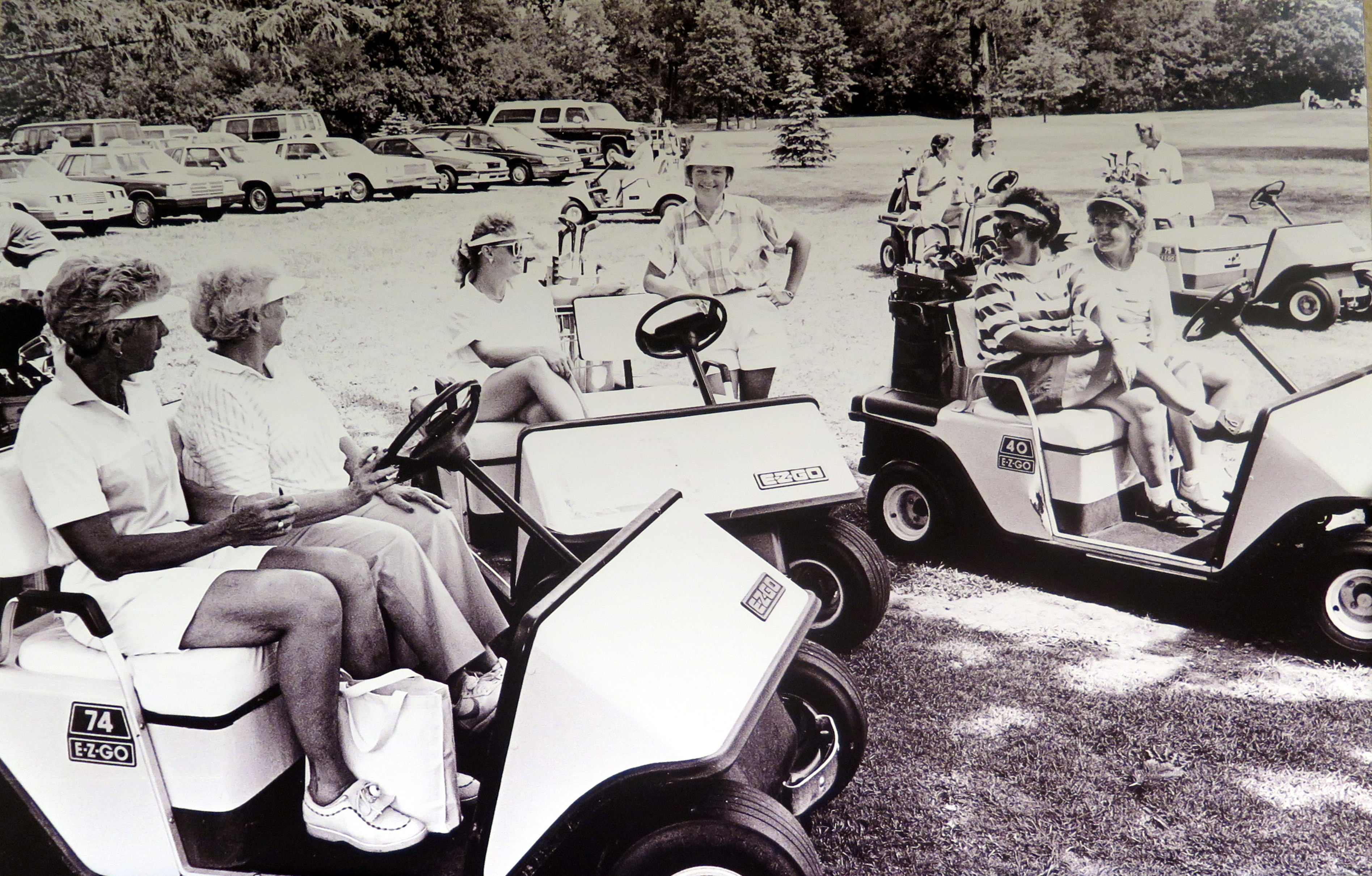 The first Leach-Mercy Women’s Charity Open was held on August 8, 1988.  The event has traditionally raised money to support the Mercy Obstetrics Unit.  As proceeds have grown, other projects have benefited, as well. 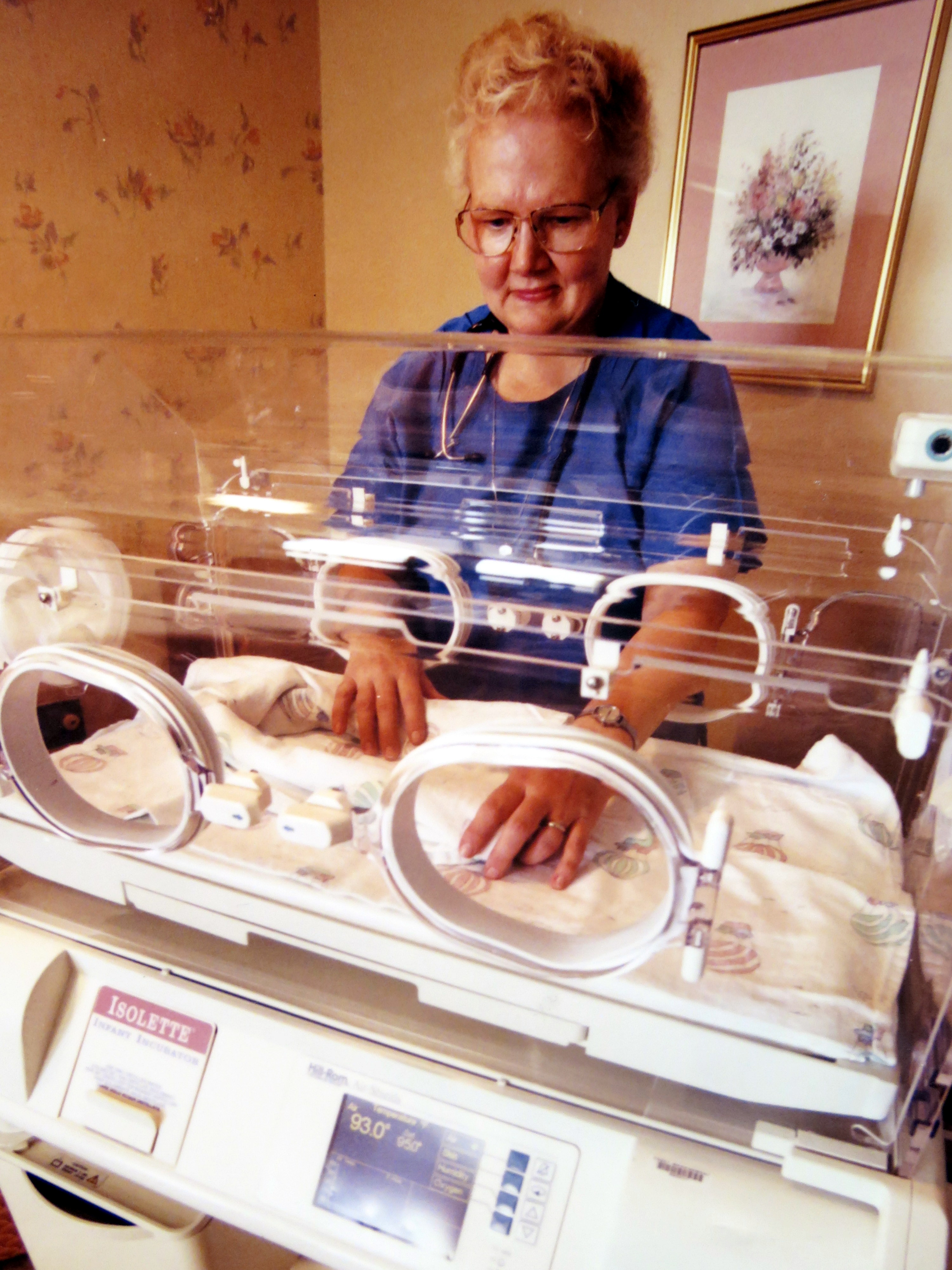 Funds raised by the 12th annual Leach-Mercy Charity Open in August 1999 were used to purchase a birthing bed for the Mercy Medical Center BirthPlace and an isolette infant incubator like the one being set up by nurse Carol Kujawa. 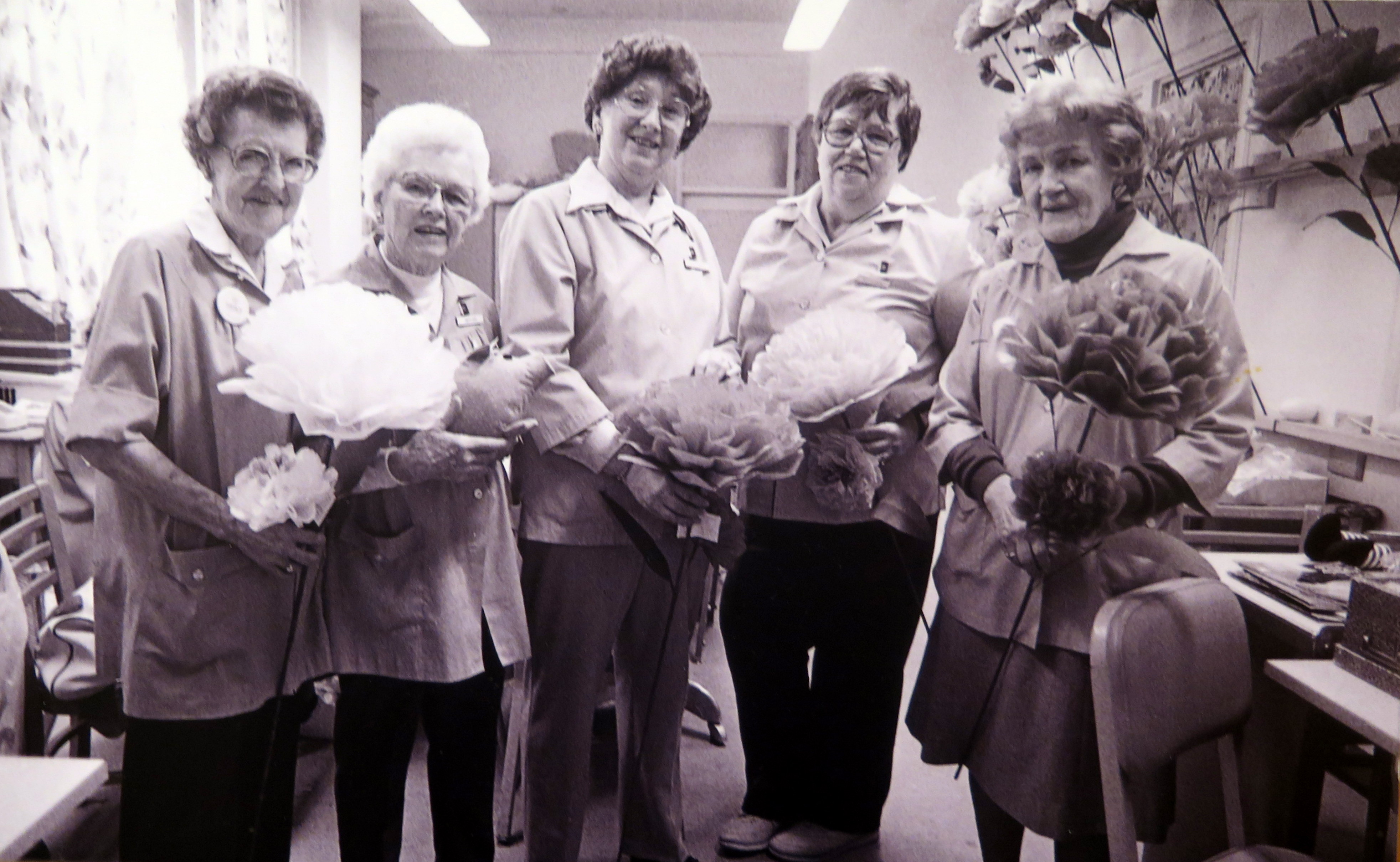 Organized volunteer efforts came into their own in the 50s with the creation of the Mercy Auxiliary in 1958.  Volunteers from 1988 show off the colorful tissue paper flowers they made to sell in the hospital gift shop to cheer patients and brighten their rooms. 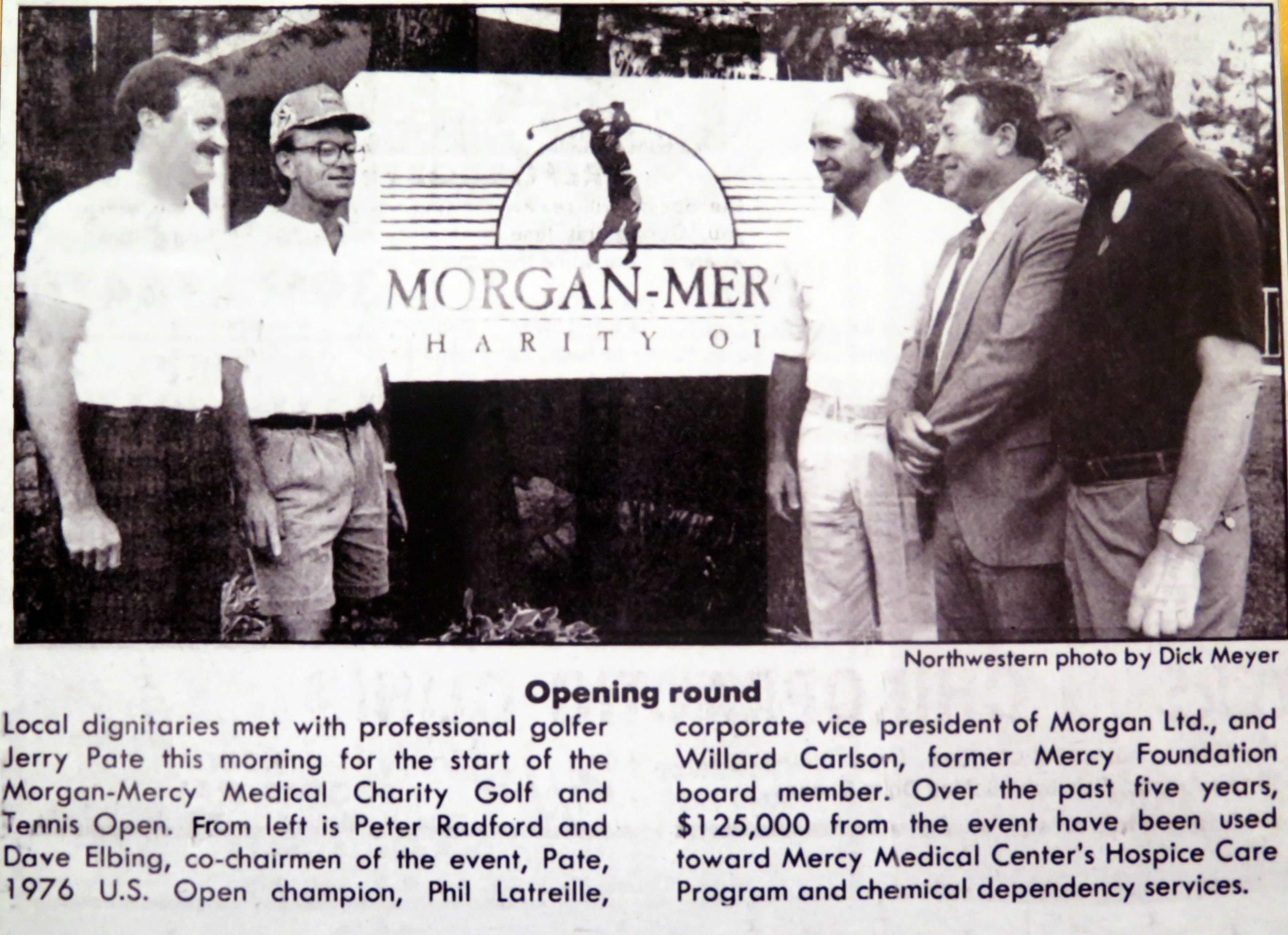 The Morgan-Mercy Charity Open was organized to support the Mercy Medical Center hospice program and chemical dependency services.  In 1994, local dignitaries met with professional golfer Jerry Pate for the start of the annual event.  From left is Peter Latreille, corporate vice president of Morgan Ltd., and Willard Carlson, former Mercy Foundation board member. 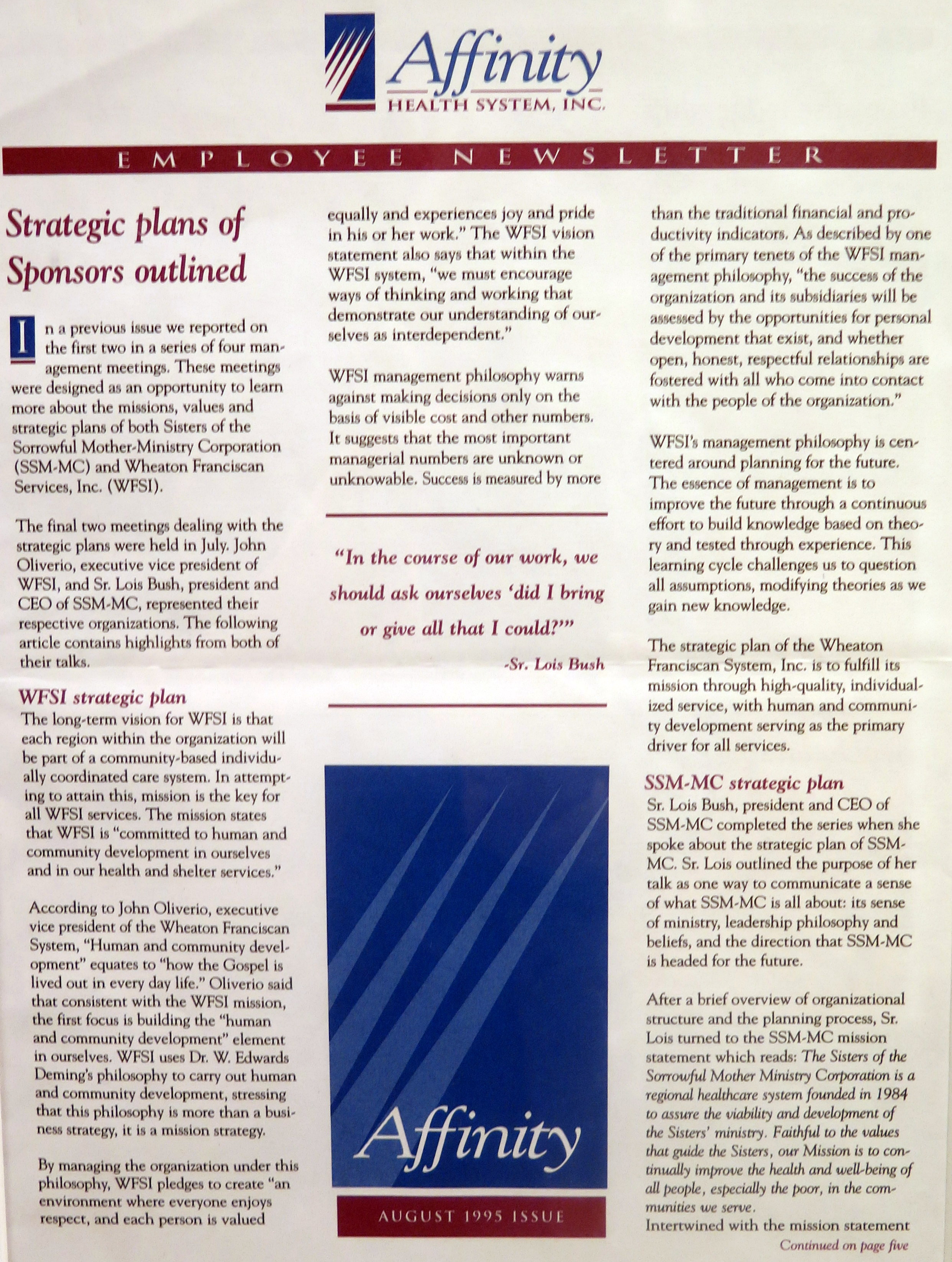 The end of the century brought major corporate restructuring to Mercy Medical Center.  The goal to reduce costs and enhance services led to the creation of a regional health care system—Affinity Health System, Inc.  Such partnerships and consolidations in the industry are intended to improve the way health care organizations are managed. 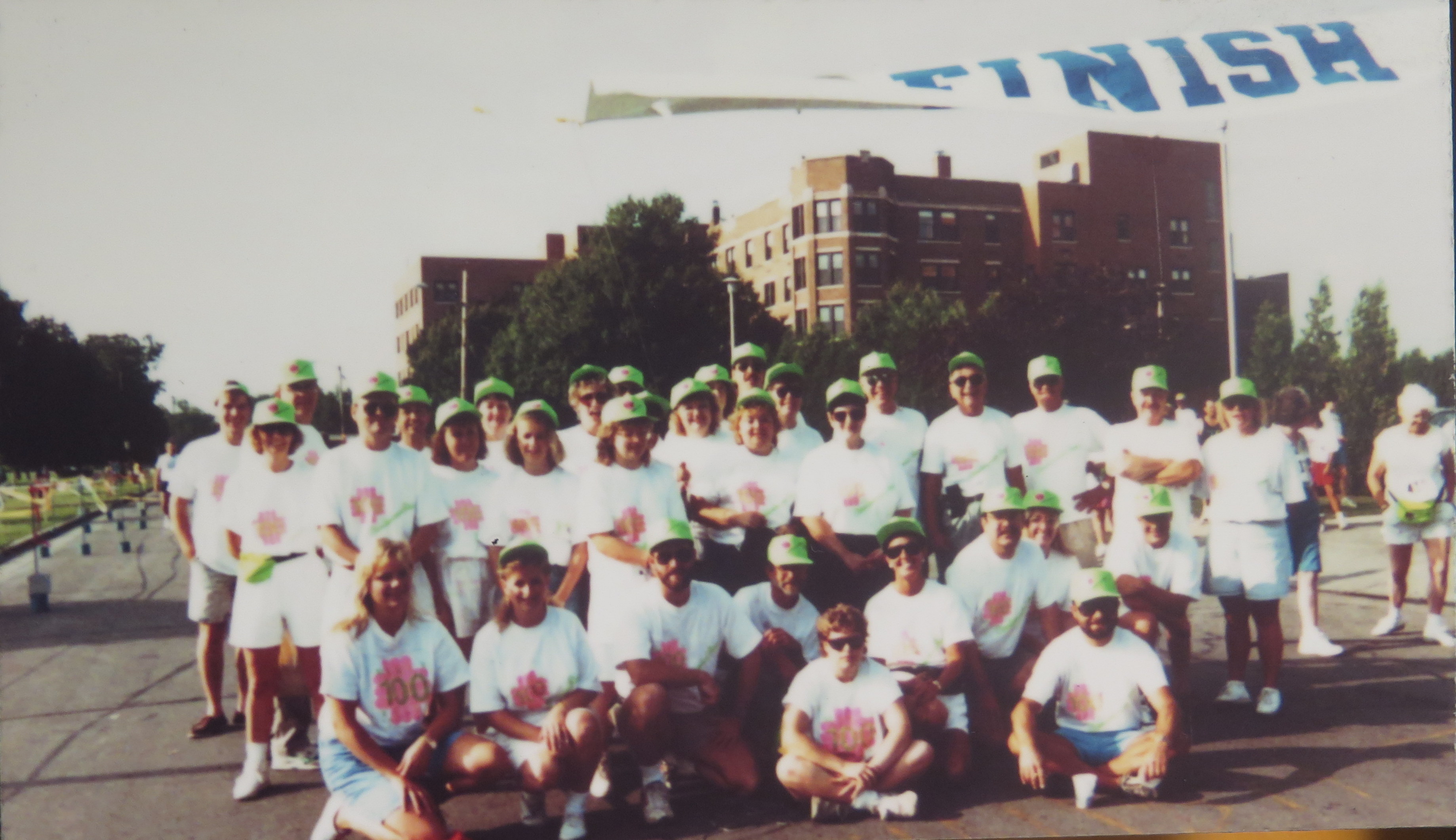 The Mercy Centennial Run was just one of an entire year of special events planned to mark 100 years of service to the Oshkosh area.  The centennial issue of Mercy Times is shown at right. 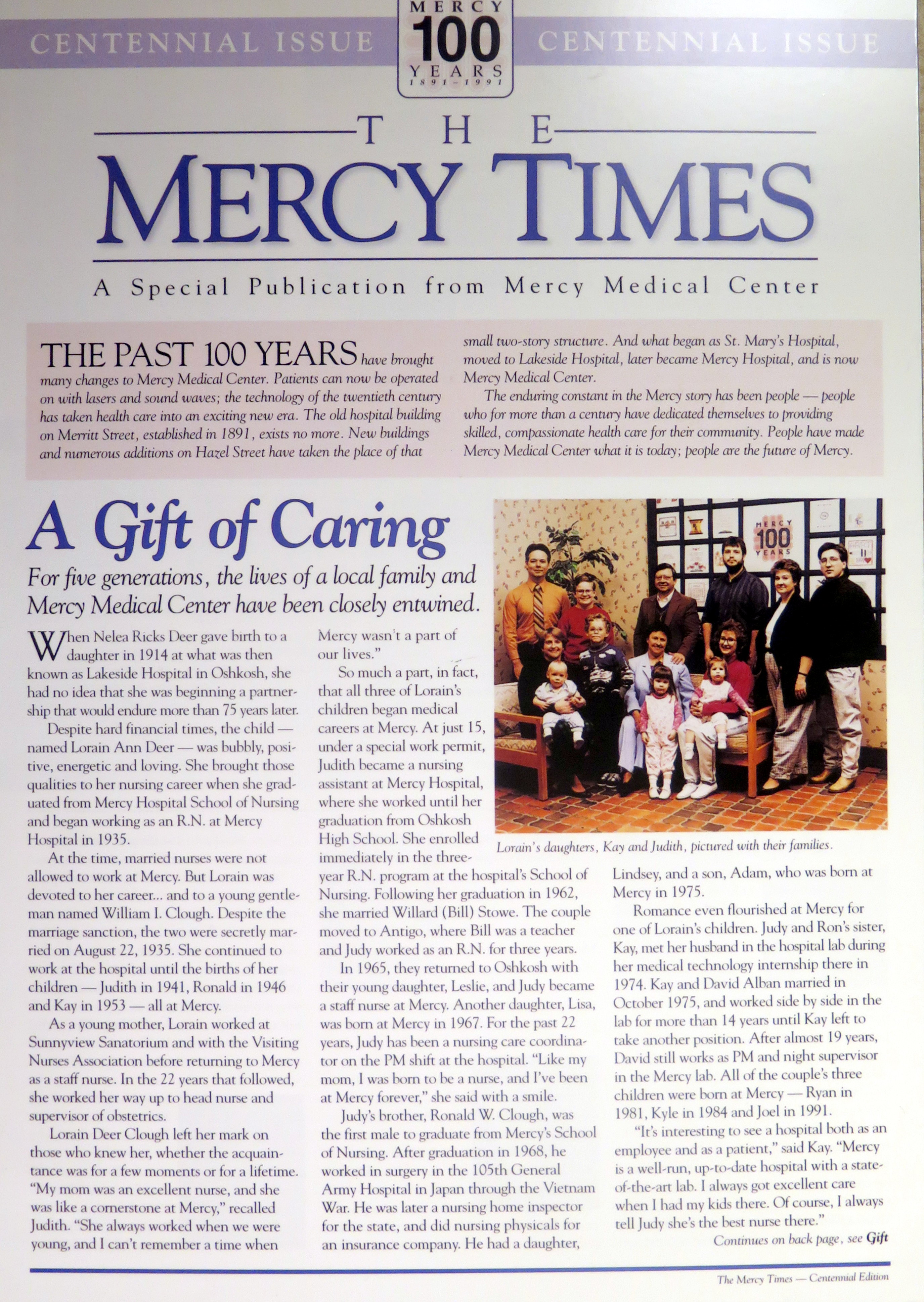 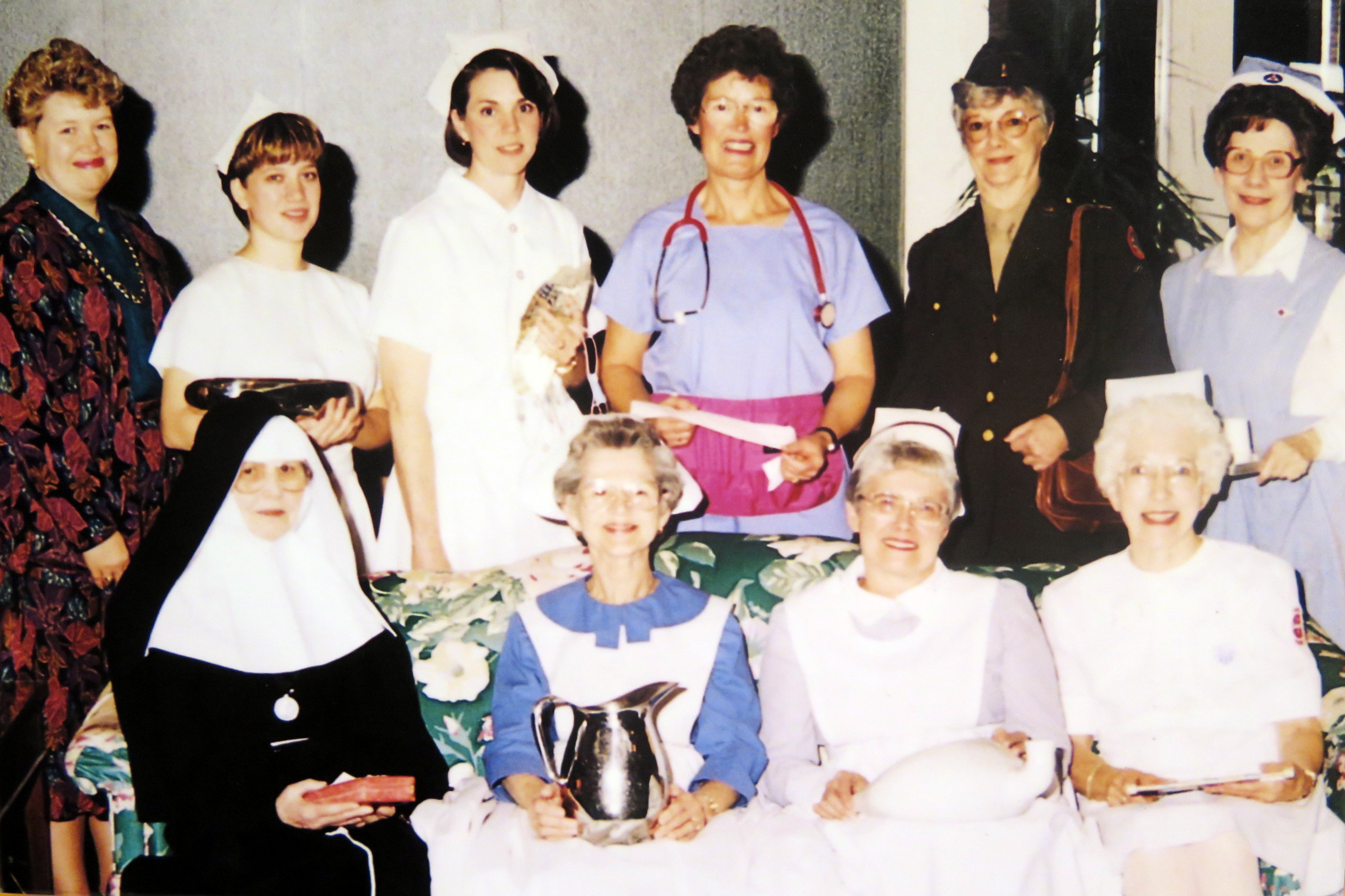